I hope you all had a relaxing and enjoyable weekend. Ours was enjoyable, rewarding but far from relaxing. Instead it was a pro-active and passionate time, which was even better. We did not gather with our extended family because of Church commitments. Instead, we choose to have our very first ever 5 course full fledged Italian dinner, complete with wines to complement. It may take a week for my arms to recover, but it was wonderful and well worth it ! While I am not Italian, my husband is half Sicilian, and we have been having fun reclaiming Italian customs and  cuisine. Along the journey however, different ghosts appear to me, asking questions. Ghosts like this woman- 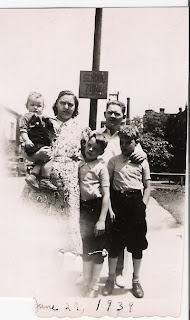 my Paternal Grandmother Elsie( pictured here holding my very young father), who was the holiday host of my childhood. Elsie was a very friendly, optimistic woman who had a strange sort of way of expressing her faith and thought the finest food on the planet came from a can.  It was something she embraced because of the times she lived through. Married two years before The Great Depression and raising a young family under wartime rations made for a style of cooking and eating that really embraced canned foods because they were shelf stable. She definitely had her traditional sort of standards with holidays however. Dinner must be served on the big table with the linens,set with actual china and the good silverware which was polished the weekend before the event. It broke her heart when it became too exhausting for her to host the holiday. Back when I was little however, we would gather early at Grams and she would let us kids set the table ( per her instructions) and set out the before dinner munchies ( always had to be green olives, black olives,spiced apple rings, spiced crab apples and pickled onions). Then she would set us to work on something one of my aunts insisted had to be included because it was fancy- stuffed celery. Take a stalk of celery,cut it into 4 inch lengths, open a jar of cream cheese with pineapples, spread inside and top with paprika. To my young, discriminating palette, this was elegant ! 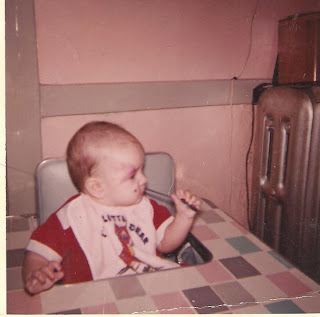 (me at six months old,  working on early silver polishing skills  )
When planning the meal this year and breaking from previous traditions, I heard Elsie imploring me to not forget the celery ! Think of the produce !!! Low and behold, I discovered that many an Italian Table includes celery, but not even close to the way of my family. It is served in a salad that is absolutely wonderful ! Perhaps a bit fiddly to prepare ( requires good knife skills), but is a delicious complement to fish and meats. 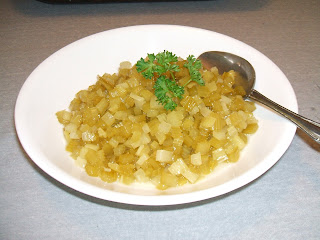 Remove any strings from the stalks. Cut them lengthwise into 1/8-inch matchsticks. Cut the sticks crosswise
into 1/8-inch cubes. This should yield about 6 cups.Put the sugar and salt in a saucepan and add the lemon juice then the celery. Cook at medium-high, stirring until the sugar and salt dissolve and the celery releases some of its liquid. Bring the syrup to a gentle simmer, stirring frequently.
Cover the pot and cook for about 15 minutes, stirring occasionally. Uncover the pot and cook at a simmer, stirring frequently until all of the liquid is absorbed.Cool completely before serving. You can store the mostarda in the refrigerator in a tightly sealed jar for a couple of months.

I think if Elsie was alive today, she would have really liked serving this one. No grandchildren would attempt to lick the half filled jars clean in the assembly process for one !

Di
Somewhere near Chicago, Illinois, United States
a 50 something mom with PCOS, somewhere in the sea of menopause who home schools , drug her family along on a weight loss journey and learned some important truths . Like so many other roadways, this one is also constantly under construction or dealing with potholes. The road is life itself, and is never a boring journey