Lamb, the mark of the Black Sheep Rebel

Sometime  in the mid 1800's, one of the men who was to be my Great Grandfather came to America as a young man on his own, motivated by the aftermath of the horrible famine. At 15 yrs old he had the sponsorship of a charitable organization, the clothes on his back and a great deal of wits in his possession, and little else. About 15 years later he was  the father  of 12, read and spoke Gaelic, and reportedly had an affinity for lamb. Not the nice cuts we know as lamb today, but the tough, stringy, horrid smelling variety called Mutton. Personally I have never eaten mutton, but I am told that it was pretty nasty stuff that had a very strong, lingering smell. Mutton was a fairly common food amongst the Irish, and I imagine that the mutton was a form of comfort food for great grandpa. His son, my grandfather, hated the stuff. He could not stand the sight or smell of it- so much so that he banned it from being served in his home. This made my father, a rebellious soul, desire it. So as a child , we would have lamb chops on occasion. Always in the form of chops and always accompanied with mint jelly. My mother nearly ruined my ability to savor lamb because of the inclusion of mint jelly !

As an adult, I would buy lamb chops and serve them as my mother did until one day I  learned that lamb also came in the form of Leg of Lamb, Breast of Lamb, Lamb Roast and much more. I experimented, but always had that mint jelly on the side.I became more brave, experimenting with recipes using different herbs, and one day I kicked the mint jelly habit ! Finally, I came across what I consider to be , perhaps, the finest lamb recipe on the planet. Considering Easter is a week away and many people will be serving lamb, I think it's time to share this one 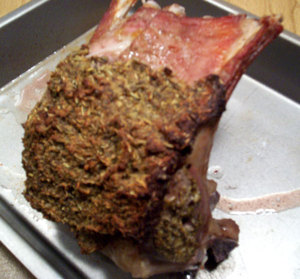 (picture is not mine, but one taken from the net of this recipe applied to a rack of lamb)

Mix breadcrumbs, herbs and olive oil in a small bowl. Meanwhile place lamb in a roasting pan and sprinkle with the salt and pepper. Brush the mustard on and then sprinkle and pat with the breadcrumb mixture to form a crust.Place in a 350 oven for 2 hrs, or until a meat thermometer reads 130. Let stand 10 minutes before carving
I think if my great grandfather tasted lamb cooked this way he might actually lose any degree of homesickness, and perhaps my grandfather would have granted clemency to the lambs :-)

Di
Somewhere near Chicago, Illinois, United States
a 50 something mom with PCOS, somewhere in the sea of menopause who home schools , drug her family along on a weight loss journey and learned some important truths . Like so many other roadways, this one is also constantly under construction or dealing with potholes. The road is life itself, and is never a boring journey